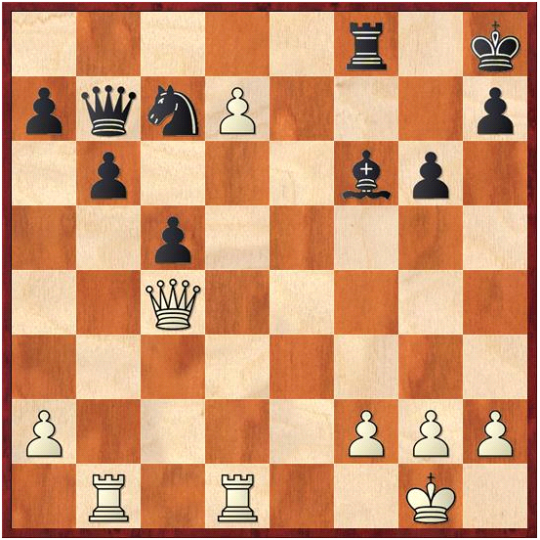 One of the common problem which most of us [including yours truly!] experience is converting the better/winning position to a full point! The common advice which I was told by most of my friends and well wishers is that we need to be very focused and concentrated from move 1 until we sign our score sheets!We sometimes tend to relax a bit after obtaining a better position and it could result in lapse of concentration.I agree to this advice.

However I wasnt entirely satisfied with this piece of advice as I felt in most of my games , my concentration level would be same from move 1 till the end of the game,yet I had failed to convert better positions to a full point.Then I realised that we should keep continuing the game according to our playing style once obtaining the winning position.Let us see some examples to illustrate my point.

What would you play as white if you have less than 30 seconds on your clock?

This game was played between young Kasparov who was around 17 years of age against Pribyl in 1980. If we have a proper look at the position,it is obvious that white is better due to the passed 'd7'pawn and uncoordinated black pieces.White is at cross roads here.He can play 1.Qc5 or 1.Rd6 here.[Ofcourse other moves are also possible,but let us focus at the most direct and concrete ones].

Now let us see how players of different styles might play this position.However it is also important to know the strenghts and weaknesses of our opponents so that we can play accordingly. Both knight on c7 and pawn on a7 are under attack.

In general Rook and a passed pawn is stronger than Bishop and knight in most of the endings.In this case,White also has an additional asset,the 'a' pawn,in other words,'Rook pawn' which is very strong against Minor pieces.Hence play is easier for white as Black faces practical difficulties and converting the position  to a win will be an automatic process.

Dynamic Player:     1.Rd6!? [threatening Rf6] and also planning to double the rook on 'd' file to create more pressure.He can also build up the attack by playing h4,h5 etc.Also Black Bishop cannot leave the a1-h8 diagonal due to Qc3+ with mating possibilities.

The common mistake which most of us commit after completing our game is to rush to our room,switch on the computer,quickly go through the game from move one and when computer shouts +1 or +2 we immediately exclaim, ha,such a easy move!How did I miss and start feeling bad for missing it.Well,if it had been so easy,we wouldn’t have missed it.Instead regretting,we should try to analyse our mindset and what was going through in our mind when we missed that moment.

Okay,so coming back to the game,according to me both Qc5 and Rd6 are equally strong in a practical game since positional player believes in his technique and dynamic player believes in his ability to handle the complicated positions.We are not playing correspondence game to keep playing the best moves all the time.Our opponent also goes through lots of emotions when playing the game.Hence we must think and decide about the direction we choose,but once we decide,there is no turning back! We have to go with the flow and keep  playing energetically through out the game.

I will present some examples from my own games: Position after 24..Qb5, White to playI was white against IM Houska Jovanka of England.When preparing for this game, I felt that my experienced opponent is a solid player and almost always plays caro kann for 1.e4. When above position was reached, I had more than an hour and she had less than 30 minutes for another 15 moves to reach the second time control.

I won a pawn 2 moves ago and now I have a choice.A] Trade queens and rest of the game should be an elementary technique to convert the position to a win.B] Try to complicate the position.
2 days ago, prior this game, I drew an technical and theoretical winning ending against Gawain Jones. That evening I decided that I will try to complicate the position and not play endgames unless the position demands for rest of the event.So naturally I ruled out the option A here and I was looking for ways to complicate the position mainly because my opponent was low on time and it would be tricky to defend such a position. I always felt that I am more of a dynamic player than a positional player, so I decided to stick to my style and played 25.Qf3 here. I also said to myself that I will be mentally strong for the next games if I manage to lose the game! This way I could play more freely without worrying about anything! I managed to complicate the position and in mutual time trouble I managed to come out on top mainly because I always felt like home in double edged and complicated positions.According to me, Sticking to our playing style in critical game moments is a better practical approach.

I will present more games of mine in the next blog

Opening Innovations in this Pandemic